When Alicia asked her 7-year old son, Charlie, if he was OK with her talking to Aussie Hands about his difference, he replied ‘Of course, that’s so good.  Just because I’m different doesn’t matter, we can talk about differences, you can talk about it whenever you want.’  Thanks Charlie for your enthusiastic approval.

Discovering and talking about hand differences became part of Alicia and husband John’s life after her 20-week scan, when they were told that Charlie was missing his ring and middle finger on his left hand.  Fortunately, the genetic counsellor gave them details about Aussie Hands and they were keen to get more information to make sense of what they’d been told.

They aren’t the only parents who have found that Google searches can unearth a lot of negative and sometimes confronting information, so being part of a safe and supportive community like Aussie Hands is a better experience all round.

Alicia started volunteering with Aussie Hands in 2017, helping the founder Elizabeth and coordinator Julie to look at a LinkedIn presence, development of a new website and proofreading marketing material.  She then joined the Board in 2019 and took on the role of Marketing & Communications Lead.

The greatest benefit of belonging to Aussie Hands for Alicia and John was when faced with the tough decision on whether or not to put Charlie through toe transfer surgery.  Being able to talk to other members who had and hadn’t gone ahead with the surgery helped them look at it from different perspectives.  Was this the right thing to do, how do we know what’s best for him when he’s too young to have an opinion?  Connecting with members helped them answer those questions and eventually make the decision to go ahead. 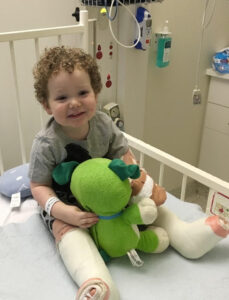 Surgeons recommended doing the procedure when Charlie was young, so at just 2 years of age he went through a 10-hour operation to transplant the second toe from each foot onto his left hand.  After the surgery, Alicia and John’s parenting skills were put to the test for a long 6 weeks when Charlie had to wear plaster casts on 3 of his limbs.  Try keeping a toddler occupied in that situation!  It did create plenty of questioning looks as strangers wondered why he had one hand and 2 feet in plaster and what his parents had done to him!

Because Charlie’s index and pinky fingers were shorter and he was missing the middle and ring fingers, there were no digits opposite his thumb to effectively grip things, so surgery has given him the ability to pick up bigger objects like water bottles.  Visually, it also gives his hand more of the usual convex shape.  Apart from a small scar and one less toe on each foot, there’s been no major impact on Charlie’s feet and the family are very happy with the outcome.

Like many first-time parents, Alicia wanted to be prepared and have every base covered, so worried about what Charlie would wear after surgery. She diligently made adjustments to many of the clothes in his wardrobe, but subsequently realised that wasn’t necessary – bigger clothes worked just fine.  We live and learn!

The Lucky Fin Project in America has a chat forum, where it seemed to Alicia and John that many parents advocated against surgery.  However, a 16-year old girl joined the conversation and commented that while she understood those opinions, she was so grateful to her parents that they did decide to go ahead with her hand surgery because she believed it’s allowed her to do many more things.

Alicia has noticed that a common view within the hand difference community is one of positivity: ‘People are who they are and can do anything without surgical intervention’, but she added ‘While this is true, if there are things you can do that provide a tangible benefit for your child, then it’s also OK to want to do that.’

For anyone else facing similar dilemmas about surgery, Alicia and John’s advice is: ‘It is your family and your decision.  Take the time to connect with others, do your homework and come to decisions that work for you.

They’re now wondering how much they should broach the subject of hand difference with Charlie.  ‘You don’t want your child to be under-prepared, but you also don’t want to make it a big thing,’ said Alicia.  ‘Until there’s a problem, don’t make a big issue out of it,’ she recommended.  Charlie has naturally integrated his difference into his everyday life and often forgets that his hand is unique, which many people don’t seem to notice.

During Limb Difference Awareness Week in 2020, Charlie took the book about hand difference, Little Miss Jessica Goes to School by Jessica Smith, to school and read it to his class, followed by a question & answer session.  Not content with just one presentation, he then went to every other class in the school and did the same thing, telling people: ‘It’s OK to be different’.  He might be short of toes but doesn’t seem to be short of confidence, although Alicia has noticed he can be a little more self-conscious around older kids who he thinks are cool.  On the whole though, he’s very outgoing and happy to get in amongst it.

At the moment, Charlie’s only frustration is monkey bars.  His grip strength isn’t as good on his left hand and he hasn’t really had to develop a strategy such as using his elbow or wrist to grab the bar.  But he rides a bike no problem, does Lego and enjoys other intricate building projects.

Thanks again to Charlie for letting us talk about his difference and to Alicia for sharing some of their experience of weighing up the pros and cons of surgery. You can help Aussie Hands continue to support families like Charlie’s by making a donation.