Story of the Month – Shevaughn & Steph luckiest mums in the world

‘Amelia fills us with the most love and joy we could ever have imagined. Her smile literally lights up a room and you can get lost for hours just staring into her eyes. We feel like the luckiest mums in the world.’ – Shevaughn

Shevaughn and Steph welcomed their daughter, Amelia, into their lives in December last year. After quite a traumatic birth, Amelia was placed on Shevaughn’s chest, and the doctors and midwives became focused on stopping Shevaughn’s large postpartum haemorrhage. As Steph looked down to admire their new baby girl, she was the first to notice that Amelia was born with a left-hand difference, missing all 4 digits and with a rudimentary thumb.

‘It wasn’t until much later in the day when the midwife offered some skin to skin, that Amelia was unwrapped and I was able to see her hand for the first time. It was a lot to take in after everything that had happened during the birth,’ reflected Shevaughn.

‘I was flooded with guilt. Was it my fault? Was it something I did wrong during the pregnancy? I cried a lot that day as thoughts – both logical and illogical – kept coming into my mind. How will she do up her shoe laces? How will she play skipping rope? What jobs will she be able to do? Will she be bullied? I mourned a lot for the life I thought she would live,’ she added.

There had been no indication of any limb difference during the pregnancy. At the 20-week routine ultrasound, Steph remembers asking the sonographer: ‘Can you see ten fingers and ten toes?’ and being told: ‘It looks like the second hand is giving a thumbs up.’ 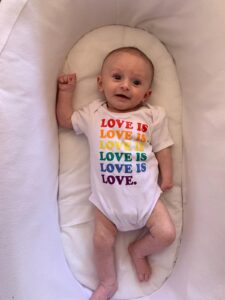 After knowing that Amelia’s Apgar score was good, Steph confirmed that all the fingers on her right hand, and all of her toes were intact.  It was an emotional time for both new mums. Looking back, they said: ‘As first-time mums, the birthing process, especially with a complicated labour and delivery, was a huge unknown as it is. The possibility of having known about the limb difference during the pregnancy, could have taken away that one added level of surprise.’

The information they received at the hospital was minimal. They were told Amelia may have a genetic disorder, and were referred to genetics, a plastic surgeon and a paediatrician, and told it would be an 8 to 12 month wait to get any answers. Apart from a few reassuring midwives, one of whom referred to Amelia as their little nemo with a lucky fin, they were discharged from hospital with no support except the number for PANDA (Perinatal Anxiety & Depression Australia).

‘It was a lot to process. The world which we knew had been turned upside down in a matter of moment,’ said Steph.

Telling family and friends about Amelia’s hand difference was met with an array of reactions. From speechless surprise to tears, thinking it was a joke and concern about the rest of her health. However, no one skipped a beat in saying that Amelia would be the most incredible, brave, strong and resilient person, and that there was nothing that she wouldn’t be able to achieve, especially having 2 mums in the health industry.

With Shevaughn a physiotherapist and Steph a paramedic and nurse, Amelia not only has doting parents, but medically savvy ones too.  To date, they haven’t been given any formal diagnosis but from their own research believe that Amelia has a limb difference known as symbrachydactyly.

A random online search on Facebook led them to find Aussie Hands and they joined when Amelia was 2 weeks old in January this year.  They wanted to join to be able to speak to other parents who have kids with limb differences, to have a support network, and to hopefully allow Amelia to find friends with similar differences to her in the future.

They were overwhelmed by the love and support they received when they introduced their family on the Aussie Hands Facebook Group. ‘People sent through the biggest welcome, offering words of encouragement, as well as photos and stories of their children with limb differences. We finally felt seen and understood. Through that post we were able to get in contact with some other members, who were incredibly kind and caring, allowing us to ask questions about their individual experiences and journeys,’ said Shevaughn.

‘It was touching. It is so encouraging to see posts of people with limb differences smashing it at life,’ added Steph.

Shevaughn and Steph finally feel that they have a place they could go to for information and assistance, especially at the early stages of Amelia’s life. Information such as the different varieties of limb differences, surgical and non-surgical options, allied health involvement, types of prosthetics and NDIS funding.  They are also keen to learn more regarding educational information like books, handouts and presentations they could give to schools in the future.

Reflecting on their experience with Aussie Hands to date, Shevaugn and Steph said: ‘It’s kind, caring and informative.  You become part of a club – a community – a part of a new family. One you may not have ever imagined yourself to be part of, but looking at how perfect your child is, wouldn’t want it any other way.’

Thank you so much to Shevaughn, Steph & Amelia for sharing their story and we look forward to hearing more about Amelia in the years to come.   You can help Aussie Hands continue to support new parents like Shevaughn & Steph by making a donation.