‘People seem to think of what I can’t do, but actually they should think about how I might be beneficial as I see things differently.’ – Caeleigh

Caeleigh wasn’t aware, until this year, of organisations like Aussie Hands and the Lucky Fin Project (USA) and finds them really positive for children and adults with hand and limb differences.

‘I was raised to believe that I was able bodied and there wasn’t really anything that I couldn’t do, but I think doing the AMP camp (a three day camp for teenagers with amputation, limb loss and limb difference) would have been fun having different opportunities to meet people like me, to see that there is a community out there, would have been nice,’ Caeleigh reflected.

When Caeleigh found out about Aussie Hands, it was only when she visited the website to join, that she found a list with different types of hand differences. Until then she had not known what her arm difference was called. She thought it was pretty crazy that at twenty-three years of age she didn’t discover just how many people there were with these differences. ‘I understand why people might get confused seeing someone with a limb difference, because that information isn’t out there, there isn’t that exposure,’ she added.

Working towards exposure and inclusion shows that there is still a wide gap between social assumptions that have been standard over the years, and the reality of living with hand and limb differences. One company that is helping bridge this gap is BraEasy – who developed a bra that can be put on with one hand. Caeleigh became an ambassador and model for BraEasy after meeting CEO and Creative Director, Rachel who created BraEasy for her daughter Jamie-Lee after having a stroke when she was nine. This NDIS approved company, is a game changer for all people with permanent and temporary disabilities. ‘Rachel asked me if I would be interested in trying on one of the sample bras during the creation stage, and honestly, they are incredible and so simple. When you are one handed and trying to put on a bra it is really frustrating as they always get stretched and are just not practical,’ Caeleigh explained.  As a matter of fact, it was via Aussie Hands connecting with BraEasy that Caeleigh first learn about us.

Growing up, she had mostly positive experiences. ‘I was very lucky at school, to be honest. My arm was a bit of a novelty, but I was in a small school and the kids were really accepting. I did experience bullying but I don’t believe that was due to my hand. I also took part in a lot of extracurricular activities after school and was a member of a dance company that I really loved. The only thing I really struggled with was swimming, although I used to swim and dance competitively.

‘I also learnt to play the flute and my thoughtful music teacher built a one-handed flute for me. It just so happened that, when I was in kindergarten, my buddy had exactly the same arm as me. She used a prosthesis in the beginning, but I never used one because it was too frustrating and I like to use my arm and elbow to carry things,’ shared Caeleigh.

At fifteen, Caeleigh secured an internship at Walt Disney World in the USA where she worked at the theme parks for six months. ‘It was my dream internship. Everyone was so accepting of people with disabilities and I was welcomed into it straight away. I think I worked in about seven different roles including retail. The employees were incredible, I gained an abundance of experience there. It was really great,’ she remembered. 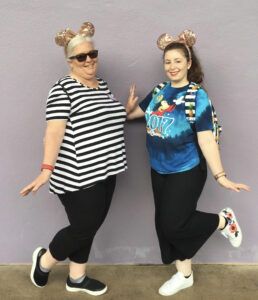 Unfortunately, there have been some negative experiences along the way. When Caeleigh started going to university she also got a job at McDonalds. ‘I was asked not to participate in orientation at university as no-one wanted to touch my arm.  At McDonalds they couldn’t find a suitable job for me. The people were lovely, they just struggled finding a role for me and the other employees didn’t really understand that it took me a bit longer to do something,’ she explained.

Pauline, Caeleigh’s Mum, recalled, ‘We just felt like they were filling a quota, or they were worried that they would be accused of discrimination if they didn’t employ her, it just didn’t seem like they made the effort to make it work. There were many things she could have done.’

Caeleigh added, ‘People seem to think of what I can’t do, but actually they should think about how I might be beneficial as I see things differently.’

To help reduce these experiences in the future, and one day hopefully eliminate them altogether, Caeleigh believes there needs to be more awareness and training provided in schools and workplaces. She also believes that while currently there is focus on minority groups, that the limb different minority gets left out a lot and that the government should definitely be doing more. She also thinks there needs to be action and that the limb different community needs to stand behind each other and that organisations like Aussie Hands are really great in helping break down the stigma through raising awareness and promoting events for members to learn from one another. 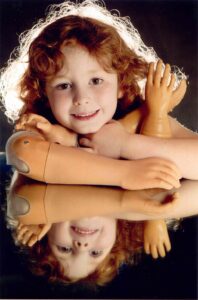 Caeleigh’s advice for Aussie Hands kids is to believe in yourself. ‘Even though people will say you can’t do things, it is always best to prove them wrong. If you want to use aids, don’t have them forced on you as you can live a perfectly normal life without assistive devices, it’s always your decision. It is also your decision when you feel comfortable using one. As many people don’t have the knowledge or the understanding, you need to believe in yourself and this helps you become very self-aware,’ she advised.

Caeleigh recently watched the newly released Disney movie Luca and says it is going to be a really great representation of hand difference and a must see for Aussie Hands kids. Whether Disney went for damage control after the disaster of The Witches, or not, it was great to see the casual inclusion of a limb different character. Giulia’s father, Massimo, when asked what happened to his arm, responds that a sea monster took it but then says he’s kidding stating, ‘This is how I came into the world.’ And really that is how simple it should be.