Music has brought frustration, healing and happiness for Emi

Music has brought frustration, healing and happiness for Emi

The word EMI might make you think of the famous music company and record label, but pronounce it differently and you’ll meet the talented musician, teacher and Aussie Hands member, Emi.

Emi was born with a thumb and 2 fingers on each hand.  Some webbing between her fingers was surgically removed, and on one hand where the fingers were fused she had another operation to separate them.

‘I’ve played the piano since I was 4 years old and practised for ½ hr every day before school, not realising that most kids my age weren’t doing the same.  My teachers chose pieces which didn’t require big hand stretches but I cross my thumb underneath my fingers more often and for some chords I’ve learnt to press 2 notes with 1 thumb.  I also spent hours on the bus squeezing a stress ball with my left hand to build strength and dexterity in those fingers and forearm,’ she recalled.

Emi’s dad is Japanese, like the company Yamaha, and he decided to send a copy of her handprints to her grandmother in Japan.  She found out that Yamaha had a one-handed recorder with extra levers which press additional notes, so sent one over to Australia for her 6 year old grand-daughter.  Emi was absolutely thrilled, learning to play practically all the notes with her dad that night and proudly showed her new skills to her classmates the next day.  Nearly 30 years on, you can watch Emi explain and play these special recorders.

‘At a Suzuki Summer School when I was about 10 or 11, the guest tutor in a piano masterclass asked me why I was passing my thumb underneath when I could just play fingers 1, 2, 3, 4, 5.  He asked me to demonstrate, so I played it my way (1, 2, 1, 2, 3) perfectly accurately and evenly.  It took him a while to realise and he blushed deeply when he found out his mistake,’ Emi laughed.

‘Up to Grade 6 (with the Australian Music Examinations Board) things were going OK, then it got harder for me to play the piano.  I knew I had musical potential, but my hands were limiting me and I found that really hard to accept.  The growing frustration developed into a sense of worthlessness, so in Grades 8 and 9 at school I became very depressed, hated myself and my hands, and at times felt suicidal. My teenage self said it’s not fair, so I made the difficult decision to stop piano lessons and focus on percussion, which a music teacher suggested would have a more level playing field for me. Transferring my rollercoaster of emotions into writing and playing music also helped me get rid of the angst I was feeling,’ explained Emi.

As an introverted youngster she recorded a lot of thoughts in her diary, then one day gave permission for a friend to read it.  Her friend’s response was to write what became a life-changing letter which was fortunately enough to circuit-break the downward spiral.  Emi saw a counsellor on and off but her parents didn’t realise the full extent of her psychological problems. ‘I admit it was a low chapter in my life, but those dark days are definitely over. It was hard but has shaped who I am,’ she said.

As a student at the Queensland Conservatorium of Music in Brisbane, Emi’s favourite instrument was the vibraphone (like a xylophone but with metal bars instead of wood).  She did her dissertation on the 4-mallet technique which involves holding 2 mallets (used to hit percussion instruments) in each hand, mastering the tricky technique herself despite a shortage of gripping fingers. 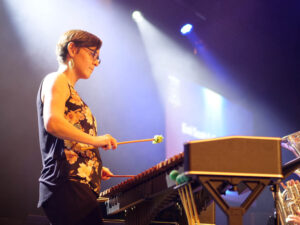 ‘As a teacher, it took me well into my mid-late 20s to be comfortable with the curiosity from my students and showing them my hands.  I knew I was healed when I stopped having that gut dread, clenching feeling in my belly.  I also believe that religion has helped me realise that God made me with 3 fingers to inspire people, by giving them a gift through my music not just because I have a hand difference.  That is a novelty factor, but the ripple effect of people seeing me getting on with life is a positive influence as much as an inspiration,’ said Emi.

When she’s teaching, she shows the kids her hand difference as they’re walking to their first lesson which gives them time to ask questions and get used to it.  She says to them, ‘On the piano we are going to use all 5 fingers – show me your 5 fingers – mine are a bit different I only have 3.’  Some kids are a bit surprised, most are curious and then they are cool with it.  She also makes a point of playing something fun and showy so they know it doesn’t stop her.  For those times when it’s hard to demonstrate something, her back-up is to either explain it in words, use another student in the group, show a photo, or her worst-case scenario is to video her husband (who also happens to be a pianist and percussionist) doing it and send that to them!  Some of her daughter’s friends say her hands look like a T-Rex dinosaur, to which she responds with a roar and gets them giggling!

‘I haven’t taught anyone with a hand difference yet, but do teach kids with cerebral palsy, ADHD or autism.  Every student is different whether or not they have a label; some have to work harder than others, but most have a beautiful attitude to music.  For people with a hand difference or cerebral palsy, your brain knows what you want to do but your body can’t do it yet, so you have to learn it step by step.  I understand the challenges that come with this, so recognise when those students are getting frustrated and need a break,’ she explained.

Parenting with a hand difference is pretty much a non-issue for Emi, but she saw a counsellor during her first pregnancy.  Her main concern was whether her daughter would have a hand difference, but she worked through her feelings and realised that no matter how the baby was born, she was the best person to be her mum.  Maybe the foetus sensed her anxieties because during her 20-week ultrasound the baby waved, which was a very special moment.

‘I found Aussie Hands in 2020 through a friend who told me about a podcast called Only Human, which stemmed from a radio interview with Karen McDonald who was the Aussie Hands President at the time.  I’m so excited to be part of a great organisation, I’ve attended some of the get-togethers, met some lovely people and am hoping to be a peer mentor when life is less busy,’ Emi concluded.

Thanks Emi, for being open and honest about how you’ve reached a high note in your life.

I know there are more gifted musicians among our members, so perhaps they can form an Aussie Hands Band?

If you’d like to buy or find out more about one handed recorders, try these links:

Soprano and Alto one handed recorders from Yamaha
https://sites.google.com/site/instrumentadaptations/recorder/one-handed-models