Natalie is the youngest mentor in the newly rolled out Aussie Hands Peer Support Network and Resource Toolkit and is looking forward to supporting kids in the areas of making friends, confidence, self-care and driving.

Natalie has a bilateral ulnar longitudinal deficiency, and said that growing up in rural Australia had its difficulties, particularly as there were no mentors, little support for her limb difference and little access to a whole lot of things: resources, funding, support groups, sports, learning to drive, specialists, occupational therapists, physiotherapists, whatever you may need. ‘I grew up and interacted with a lot of people who had disabilities, and we would go to similar things, but there wasn’t anyone like me, having something so rare and unheard of,’ she said. ‘Hopefully we can change this a bit with the mentor program.’

It is quite common that people without a limb difference don’t understand what the issues and difficulties can be. ‘While people respect me for what I can do, they don’t always realise what I have been through just to have an average day.  I explain to them that I can only drive for about 90 minutes before I fatigue, and cooking a one hour meal takes me two and a half to three hours. They say, “Oh well you can get public transport or order HelloFresh,” but you still have to organise these things and get to the station and back and prep the food and so on. There is a lot that goes on behind the scenes that isn’t seen,’ advised Natalie.

One of the challenges she has experienced is the need for special permission for a variety of things. It was a major hurdle getting her driver’s licence where her L plates were suspended for a while because an extension for extra medical reports meant that paperwork wasn’t submitted on time.  Then some paperwork was lost in the system and people didn’t really understand why she was there – umm, ‘to get my licence so I can be independent.’

She also had trouble accessing NDIS, so when the opportunity to be part of the Peer Support Network with Aussie Hands came up, she joined. ‘I think I just wanted to help people who were going through those kinds of situations like I did: needing special consideration for exams at high school and university, applying for jobs and rejection, getting my licence and NDIS approval, even for my mum getting Centrelink, the endless questions of why you need or deserve assistance, it’s a constant thing of advocacy. It can be exhausting,’ reflected Natalie. 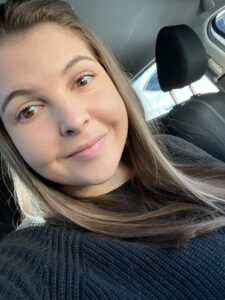 As hand and limb differences, and disabilities in general, are slowly recognised and embraced in society, there is always the misguided ‘inspiration porn’ that most people with disabilities have to deal with. Natalie is currently in her fourth year at university and supporting herself by working at Woolworths. She understands that people don’t really mean to demean her but they can be quite passive aggressive with comments like, ‘It is so good to see someone like you with a job.’ Natalie added: ‘What do they mean, someone like me? I am just trying to make some money. Why does it have to be something special or so out of the realm of possibility that I, you know, have a job and I’m trying to live my life?’

Telling a child with a difference not to hide their arm/hand, that you love them just the way they are, to ignore the looks, the scrutiny, may feel like you are supporting them but it isn’t always the case. Acknowledging why they are hiding their arm/hand, how they feel on that day, in that moment, in that scenario, can be more helpful and supportive. Natalie still hides her arm on some days. She said it depends on her mental capacity at the time and she considers: How much am I willing to deal with? How much do I want to put myself out in the world? Do I want to open myself up to more attention?

‘A lot of people ask me if I am a Thalidomide baby, and I’m like, that drug was banned in the 1970s, 1960s even. I was born in 1999. How old do you think I am?  Everybody has bad days where they just don’t want to deal with things. I suppose I just don’t feel like being resilient every day,’ shared Natalie.

And it’s true, why should we always be expected to be resilient? Shouldn’t society learn how to engage appropriately, to understand how we might feel?

‘I think the internet and the Paralympics have definitely helped in terms of exposure and understanding disabilities’ said Natalie. Social media has probably been the biggest game changer for minority groups by helping individuals gain access to others, information, conversations, friendships, advice and a chance to ask questions. ‘But it has to be used in the right way. Social media can also be used to demonise and exclude but ultimately there is good in it. You diversify and expand your knowledge base, but it is not a community that able-bodied people are generally part of, unless they have heard of the exception to the rule like Dylan Alcott, or those who happen to be famous for reasons aside from just being disabled,’ added Natalie. 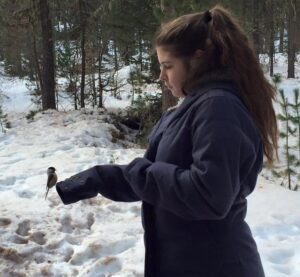 ‘I have definitely had challenges but I have been really lucky with support from family and friends. I also had an amazing experience doing a Rotary exchange for a year in Switzerland that opened up another world to me. Having this disability and these challenges hasn’t stopped me from trying my best and living a good and pretty typical life,’ she continued.

For our Aussie Hands kids, Natalie would love them to contact her for a chat and any help she can provide. She suggests they should believe in themselves and do the best they can, but also to acknowledge that they will at times lack confidence and have bad days. She said that is okay to want to hide your hand or arm and not want to deal with the attention, the questions or the world on those days.

Access to peer support groups and resource toolkits, like those developed by Aussie Hands, is providing assistance in a world where the challenge of exposure, understanding and acceptance still remains.

Thank you so much to Natalie for the fun and candid conversation and for sharing her journey.  You can help Aussie Hands continue to support people through the Peer Support Network by making a donation.