Job dilemmas, being in the public eye and Aussie Hands president – Stuart’s Story

Job dilemmas, being in the public eye and Aussie Hands president – Stuart’s story

Stuart discovered Aussie Hands on social media two years ago and initially became involved as a mentor with our Peer Support Network and assisting with the Online Resource Toolkit. Stuart has hand differences resulting from amniotic band syndrome and this was his first real involvement helping people with disabilities. He said, with a wry grin, that he put his hand up to volunteer and ended up starting as president. ‘It is such a great idea linking parents, adults and children. I can pass on my knowledge and experiences and continue with the good work Aussie Hands is doing.’

Stuart comes from a military family and went to eight different schools, experiencing more exposure and new starts than is comfortable for a child with a hand/limb difference. ‘And with a hand difference it added that extra level of difficulty. Trying to fit in was a little tough and I was really conscious of my difference. My hands were an easy target, but it didn’t stop me playing the piano or a lot of sports as my parents were adamant that I did as much as possible to have a normal life,’ he shared.

After school, Stuart moved to Canberra to complete a Sports Media degree at university. It was also where he began a colourful career in an array of jobs around the world.  He said, ‘I began working at supermarket checkouts while at university, then I was a radio journalist and newspaper journalist, a tour guide in Europe doing hop-on hop-off bus tours for four years, a door man at a five star hotel in London, duty manager at a Brisbane backpackers, Operational Support at a hotel company in Australia and New Zealand, Executive Officer at Rowing Australia in the ACT after I completed my Masters in Sports Administration, and am now a Data Analyst with the Australian public service.’

One dilemma for people with hand and limb differences can be the job interview. How much to tell, what to tell, do I tick the disability box or wait until an interview, will they judge me, do I have to prove myself, are all questions that can go through your mind.

‘As a general rule I don’t tick the disability box and interestingly, for the tour guide position with Busabout tours, this interview was the first time that I felt I needed to talk about my hand. What they wanted to know was, “Can you hold a PalmPilot?” which is a portable, palm-top computer, about the size of a large iPhone,’ Stuart shared.

Ticking the disability box can go two ways. The potential employer could see it as more work and expense for them if they need to change anything in the workplace, or it could be welcomed as it encourages diversity and satisfies company requirements. Stuart said that it really depends on the individual and how comfortable they are in sharing this information about themselves.

Some of Stuart’s jobs have been in the public eye so he’s had to deal with scrutiny and attention. ‘I think I had a chip on my shoulder back in the day but today I think I find it is more about being aware of the situations I find myself in. As a tour guide, I learnt that it was really no big deal. There were thousands of people on and off the tour buses and I was making self-deprecating jokes to diffuse any situations. However, I was really shocked when two ladies from Canberra wrote some nasty things on their blog. It hadn’t mattered for so long as all these people I was meeting and helping, the least of their concerns was my hands. 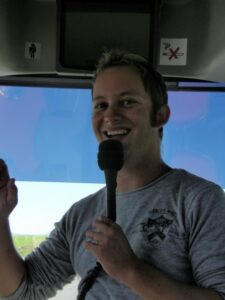 ‘Later, I met one of the ladies from the blog, who approached me and said,

“We weren’t the nicest people to you.” I didn’t feel the need to tell her that I had actually read the blog and realised that it reflects on them more than me. When people say it was a joke, well it wasn’t taken as a joke and really isn’t fair. I always feel some anger when something first happens. At the backpackers some guys called me ‘fingers’, but I knew they had their own issues and clearly were not very nice people. But, thankfully, it has been about 10 years since someone has made such a comment and I suppose with age you also learn to deal with your anger a lot better.’

Stuart suffered with depression a couple of years ago. ‘I was 39, single, and it kept looping around in my brain that no-one will ever go for me. I have a disability, I am balding, short, and was overweight. I was asking myself why on earth did I cop this. But I have worked through it and playing sport helps me.  I play cricket and go out rowing at 6am which has a calming effect on me. Disability is just life on the hard setting, it makes it a little trickier but there’s no reason why you can’t thrive and find ways to deal with it,’ he shared. 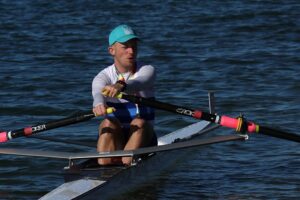 He still doesn’t like to be photographed where his hand can be seen, but puts himself out there by sharing his story and hopes that this helps the Aussie Hands kids. The more we see stories about people like Alex Brooker, a brilliant comedian from the UK, and, Shaquem Griffin, an NFL player in America, the more that this marginalised pocket of amazing people will be normalised.

As president of Aussie Hands, Stuart wants to continue building awareness in the community, provide support and share the knowledge and coping strategies that adults have gleaned from their experiences. And most importantly for members to know that they are not the only one, that what you are feeling as a child, as a teenager, as a parent, someone else has experienced this and the mentors are here to help.

Today, Stuart is in a good place and said, ‘It is who I am. In the end if people don’t want to deal with me then it is their loss. I have been so lucky with an amazing life and amazing experiences so far. Yes, it can be frustrating, but I wouldn’t be who I am without my differences.’

Thank you Stuart for the great chat and sharing your story.