If the child is using their affected arm to assist with pulling up pants, a loop sewn inside the waistband of the pants on the affected side can be used to hook a finger, the hand or forearm through to pull the pants up.

Loops can also be used on the inside of socks to help pull them up.

Button Aid – 4 in one dressing & other button aids.

Watch video: demonstrates how to button your jeans up with one hand using a homemade device and a door handle to assist.

What our Members say  “A general determination and self-belief – my 4 year old buttons his own shirts one handed by drawing the 2 sides together and manipulating the button through the hole.”

A zipper pull, split ring or ribbon loop as well as other zipper aids can be attached to the pull tab if a finger can be used to hook and the pull tab cannot be pinched.

Watch video: Zipping up a jacket with 5 year old Sam from My Special Hand and Ryan from Living One Handed.

What our Members say   “Avoid side zips with buttons…put it [skirt] on with the zip and button at the front and swing it around.”

No more hassles with hooks! 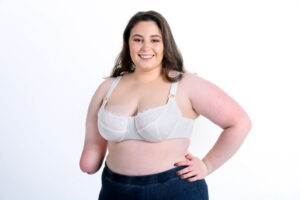 You can now choose a one-handed bra from BraEasy which is easy to put on and take off using velcro openings.  Tried & tested by people living with a limb difference, disability or just a broken arm, these bras allow users to dress quickly, easily and independently.  Check out their website at www.braeasy.com

What our Members say   “Do it up at the front and either twist it around or do it up and put it over your head like a t-shirt.”

What our Members say  “My mum made a cardboard shoe with real laces and I spent time doing it both with and without her until I gained success. I did this before going to school.”

What our Members say  “Jewellery… buy gold and leave it on forever! Or you will need to ask someone(s) help or be a contortionist and use your teeth to get bracelets on.”